A number of residents have expressed concerns about drivers failing to observe the new 30mph speed limit, the sparcity of speed limit signage, and of associated bad driving behaviour. We have been in touch with officers of Middlesbrough Council concerning these matters from the date of the introduction of the new limits.

The most recent authoritative feedback we have received from a council officer this week is as follows:

“You may be aware that there are large terminal speed limit signs where the limit changes, e.g. from a 40 to a 30mph area, along with some ‘NEW 30 MPH SPEED LIMIT IN FORCE’ signs. Examples of these can be seen at the Southern Cross junction.  Unfortunately, the signing regulations don’t allow for 30mph ‘repeater’ signs to be placed on the highway as, when in an urban area with street lighting, 30mph is the default speed limit unless otherwise signed.

“However, the Council recently installed 4 additional ‘NEW 30 MPH SPEED LIMIT IN FORCE’ signs along the route, with a further 2 to follow. These signs will be erected at regular intervals to face both north and southbound traffic to reinforce the new speed limit for motorists.

“Once these signs have all been installed, the Council will arrange for speed surveys to be undertaken to check adherence to the new limit.  Should these surveys show a speeding problem, we can look at further options such as additional signing / markings, along with Police speed enforcement or speed activated signs.  This will enable [us] to take holistic approach to it when everything is complete.

Please note that because of industrial action by the National Union of Rail, Maritime and Transport Workers (RMT), there will be no trains running on the Nunthorpe to Middlesbrough line on Tuesday 21st, Thursday 23rd, and Saturday 25th of June. On the 22nd, 24th and 26th some services will run as detailed on Northern Rail’s Strike timetable.

Northern Rail say: “However, customer safety is our priority, we advise you not to travel between Tuesday 21 and Sunday 26 June and make alternative plans.”

Middlesbrough Council’s newsletters by following the link on our home page.

Click on the image to go to the latest issue

The Parish Clerk issued the following Press Staement to Emily Craigee of the Gazette following the EGM on 30th May 2022 called to discuss the Community Centre bidding process.

At an Extraordinary Meeting of Nunthorpe Parish Council held on 31st May 2022, the Parish Council welcomed Ian Wright (Middlesbrough Council’s Director of Finance) and Louise Grabham (Head of Commissioning and Procurement). This Meeting was convened for Middlesbrough Council to explain recent correspondence announcing the re-start of the process to construct Nunthorpe’s Community Centre – a process established by Middlesbrough Council and accepted by all parties in October 2021. The meeting was open to the public, and was attended by representatives of the Nunthorpe and Marton Playing Fields Association, who had submitted a bid to construct and operate the Community Centre.

Parish Councillors appreciated Mr Wright’s apology for neglecting to consult those who had submitted bids before he decided that the Council’s process could not stand up to challenge.

The Parish Council was also grateful for his clarification of unfortunate ambiguities in his letter, and in particular welcomed his assurance that reference to the need to be “free of perceived conflict of interest” did not relate to concerns about the conduct of either of the parties or of any individuals who had participated in the bidding process. Mr Wright undertook to confirm this reassurance in writing. He stated that the concerns leading to his intervention arose because the Council’s need to undertake “due diligence” had not been clearly documented at the start of the process, and therefore he had decided that the process must be restarted on the basis of a clearer specification. The plan outlined at the meeting is that the new process will begin within a few weeks and will take about three months.

In the light of the comments from Mr Wright and Ms Grabham at the meeting, the Parish Council will now be consulting with the partners in the Consortium – Nunthorpe Community Council and the Nunthorpe Institute. 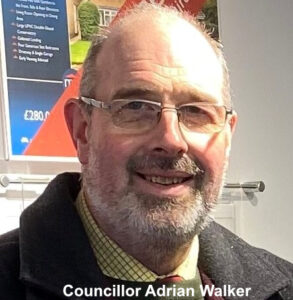 At the Parish Council Meeting on Thursday 19th May 2022, Adrian Walker was elected as the Chair of the Council, following in the footsteps of Morgan McClintock, a hard act to follow. The Council also elected joint Vice Chairs, Morgan McClintock and WadeTovey. The entire Council congratulates those appointed and thanks Morgan especially for the profound effort he has put in to developing the Council during his time as Chair. 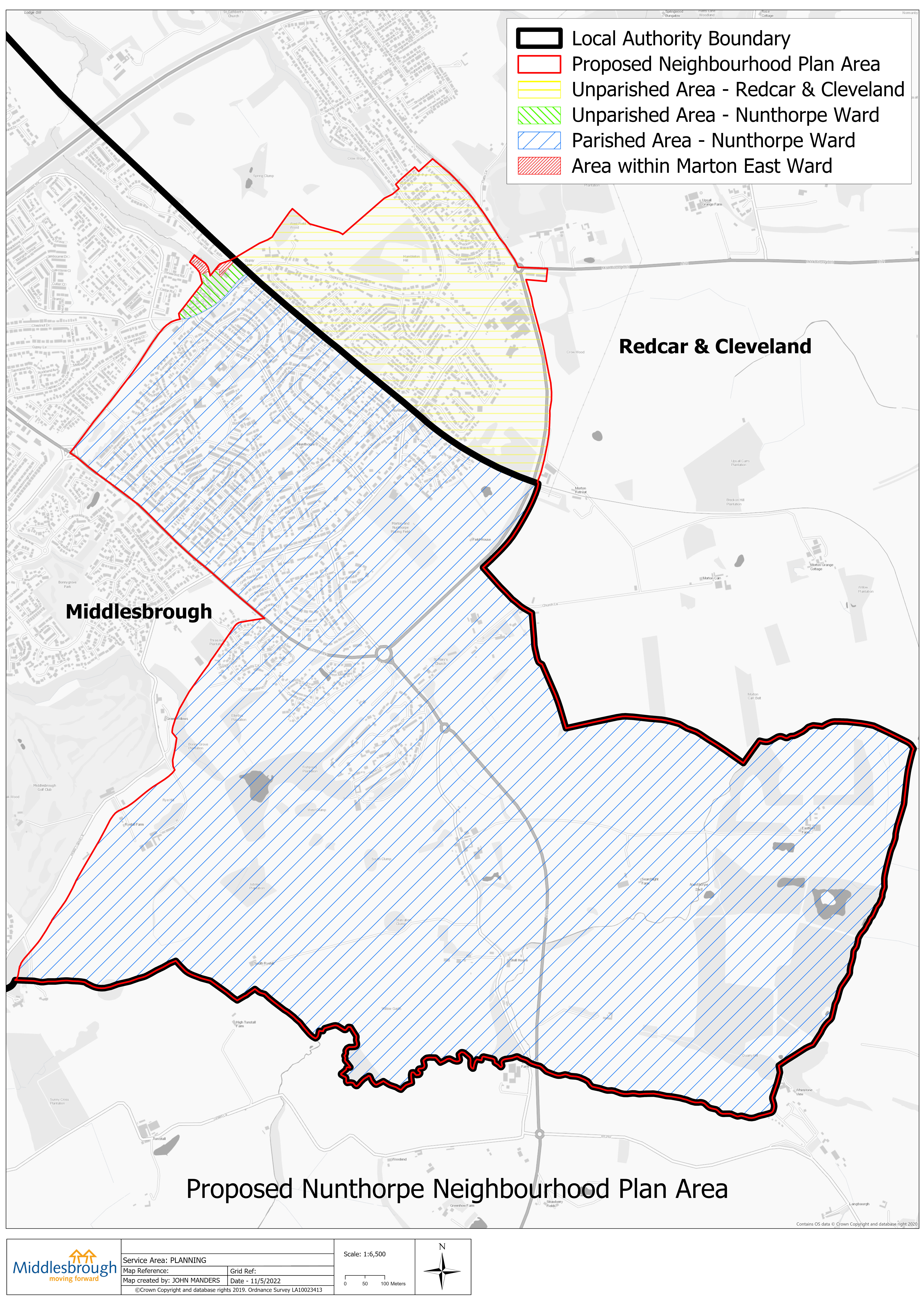 Nunthorpe Parish Council has been working for a very long time to create a Nunthorpe Neighbourhood Plan (that is Nunthorpe on both sides of the railway). Because the area is in two Local Authorities (Middlesbrough and Redcar & Cleveland) there have been legal matters that had to be discussed and agreed with both Councils. This has taken time, but has finally reached the stage where both Authorities are now conducting a Consultation exercise. The small map on the left will take you to a much larger version if you click on it (opens a new window), but the area covered and the division between Middlesbrough and Redcar & Cleveland is clearly defined by the railway line even at this small scale.

You can find details of the Consultation by following this link https://arcg.is/0iezqS which also opens a new window. There are further links from that page to the relevant pages and background information on both Councils’ websites.

This is a joint six-week public consultation event from Thursday 19th May 2022 until Monday 4th July 2022. We encourage you to take part by following the link above.

We will soon create a new page on the website, directly accessible from our home page, providing you with lots of information about Neighbourhood Plans and updates, as we make progress towards the creation of the Nunthorpe Neighbourhood Plan. 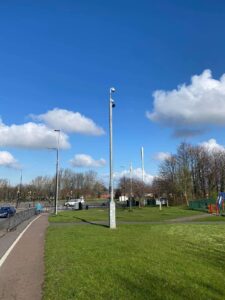 At a recent meeting of Marton & Nunthorpe Neighbourhood Watch, Morgan McClintock the Chair of the Parish Council, brought up the subject of the obsolete CCTV camera located at the Southern Cross Junction. This is something that has been raised by the Parish Council on a number of occasions following damage to trees, ASB, fly tipping, and drivers failing to stop when pedestrians are using the zebra crossing.
Mayor Andy Preston and Deputy Mayor Mieka Smiles, who were both present at the meeting, undertook to follow up this issue with the relevant Officers of Middlesbrough Council, and we this week received confirmation that a request has been raised for new cameras at the Southern Cross Junction.
A new PTZ camera with three static cameras will be installed. The equipment is due for delivery by the end of June so the camera is scheduled to be upgraded and operational by the end of July. This camera will be able to view activities taking place around a significant section of Nunthorpe, Marton East and Marton West as well as the operation of the traffic lights.
By working together in a constructive way we have achieved a positive outcome.
Mike News 10/05/202210/05/2022 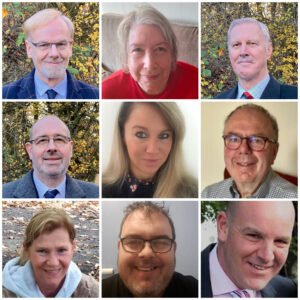 This is your opportunity to hear the Chair’s Annual Report, and ask questions of the Council and meet us face to face. Do come along. Members of the public and the press are invited to all our meetings, but on this occasion the focus is especially on you. This part of our meeting will be complete by 7:00pm.

Your Parish Council takes an interest in and acts on all sorts of things to do with the Nunthorpe Parish (and sometimes beyond its boundaries where there is potential impact on us). We cannot all look in to all matters that concern us, or are raised with us by Parish residents. We do the sensible thing and individual Councillors volunteer to focus their attention and time on broadly defined areas of Parish life. They then can feed back their more detailed insights and research at Parish Council Meetings so that, where needed, decisions can be made my the whole Council (Resolutions). Such Resolutions may be to write letters (say on Planning issues); to support local initiatives with grant funding and personal action; or to investigate new opportunities and long term plans in and for the Parish. You can see many examples in our most recent Minutes.

Constitution & Organisation: Morgan McClintock and Mike Eccles, with Mike taking the lead on developing  a communications strategy  (including website management)  and on enhancing our HR framework.

Martin Lyon, our recent recruit has yet to be integrated into this list.

Many Councillors volunteer time to other Nunthorpe Groups. This is particularly helpful in informing their focus areas and the whole Council when decisions are made.

Please click on the image to open the Spring 2022 Greater Nunthorpe News.