As a reward for loyalty King William gave two-thirds of the settlement lands to Robert de Brus keeping one-third for himself. Nunthorpe gained its present name from a group of ill behaved Cistercian nuns from Hutton Lowcross who settled in Thorp in 1162 on lands granted to them by the tenant Ralph de Neville. The nuns were granted two pieces of land and a mill by the tenant of Thorp, believed to be on either Nunthorpe Hall or Grange Farm. The nuns stayed only a few years and moved on to isolated Baysdale but were able to retain their Thorp lands. It is believed this and their notoriety added the “Nun” to Nunthorpe. Nunthorpe land passed through the hands of many important families over the next centuries. Old records suggest early Nunthorpe located in the area now occupied by Nunthorpe village.

During the 16th century dissolution of the monasteries land went to Nobleman Ralph Bulmer; in the 17th century to Marmaduke Constable who built Nunthorpe Hall and in the 19th century a parcel of land and title of Lord of the Manor was bought by The Ironmaster William Hopkins who built Grey Towers in 1865. 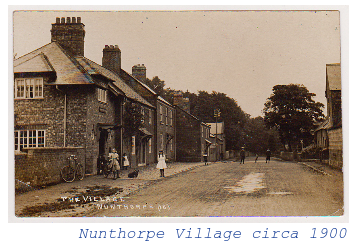 With a population of 128 people in 1811 Nunthorpe remained an agricultural community up to and throughout the 19th century, the industrial revolution having little impact on its farms and farming economy. The phenomenal growth in the 19th century of the nearby hamlet of Middlesbrough into a large industrial town eventually brought about change which led to the expansion and growth of urban Nunthorpe. However Nunthorpe Village has remained little changed since 1900 gaining Conservation status in 1975. 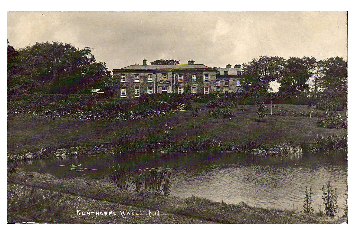 The first Nunthorpe Hall was built in the 1620s. It was rebuilt and enlarged in the 1800s and again during the Victorian period.Lived in by Ironmaster Sir Isaac Wilson 1850-1899, it was used as a maternity home after the second world war and is presently a residential home for the elderly. 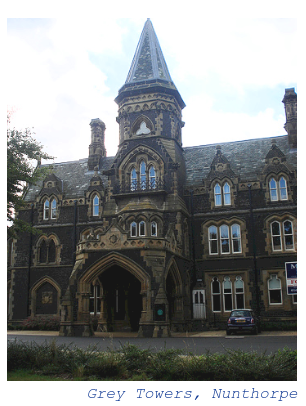 William Hopkins, Ironmaster and Director of the Stockton and Darlington Railway built Grey Towers in 1865. He lived there, enjoying a lavish lifestyle until 1879, when his fortunes changed following the Tay Bridge disaster for which his company had supplied the iron work. After Hopkin’s death, Grey Towers, together with 390 acres, was put up for auction but withdrawn at £30,000. In 1895 Grey Towers was bought by Sir Arthur Dorman, founder of Dorman Long Steel Works who lived there continuing the lavish lifestyle until his death in 1931. After Sir Arthur’s death, a syndicate bought Grey Towers with 77 acres of parkland for £4,500 in 1931 and resold it in the same year for £7,000 to Alderman Poole who presented the house and land to Middlesbrough for use as a sanatorium for tuberculosis sufferers. Grey Towers became known as Poole Hospital and stayed open from 1932 until 1994. After a period of neglect Grey Towers was sold to developers in 2002 and converted into the present day ‘Grey Towers’ luxury apartments.

The Ironmasters and their impact on Nunthorpe

As well as the railway contributing to change in Nunthorpe, a number of Middlesbrough Ironmasters and industrialists chose the village and countryside of Nunthorpe as their home. These men who had gained wealth and status through industry and had achieved political positions in Middlesbrough enjoyed “gentrified” living, and became financial benefactors influencing the changes to Nunthorpe.

• Sir Isaac Wilson – Ironmaster and Director of the Stockton and Darlington Railway bought Nunthorpe Hall in 1850. Wilson built the first school in Nunthorpe in 1855 and was the first Mayor of Middlesbrough.

• Sir Arthur Dorman – co-founder of Dorman Long Steel Works, lived in Grey Towers 1895-1931. Sir Arthur had the greatest influence on Nunthorpe of all the Ironmasters.

The opening of the Middlebrough to Guisborough Railway in 1853

The advent of the Middlesbrough Guisborough Railway in 1853 with passenger facilities in 1854 opened
up wider horizons for Nunthorpe residents. The new line and station were sited away from Nunthorpe village with the crossing point along the Guisborough Road. The line originally was built to carry ironstone from the Pease ironstone mines at Codhill. Sir Isaac Wilson, then a director of Stockton and Darlington Railway and resident of Nunthorpe Hall ensured the line carried passengers from 1854 and, although not immediately popular with the villagers, by the end of the century the lin

e was used by Nunthorpe residents enabling them to take up work in industrial Middlesbrough rather than in traditional agriculture. Thus with the advent of the railway came a small but gradual increase in the population with the census return of 1851 recording 126 residents and the 1901 census recording 198 residents of Nunthorpe.

The growth of urban Nunthorpe

Urban Nunthorpe grew with Sir Arthur Dorman’s planned suburb around the railway station. Built circa 1900 and separated from Nunthorpe village there were no shops, no pubs, no house numbers and only slate roofs, all in accordance with Sir Arthur’s plan. By 1912, 60 houses had been built around the station and other development continued north on Guisborough Road. From 1900 urban Nunthorpe began to flourish as a community. In 1903 Sir Arthur Dorman built a new school and school house which later became the Vicarage. Churches and Chapels were established and social and sports facilities built. Tennis, cricket, bowls and polo were played in Nunthorpe.  Dances were held in local barns which were extremely popular. 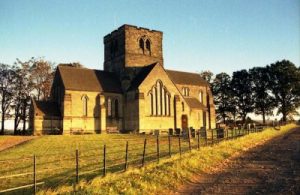 In 1923 the new St Marys Parish Church was built with land and money given by Sir Arthur Dorman, Nunthorpe residents also raised money towards its building costs. With an estimated population of 750 a new Nunthope Parish was established in 1924. In a relatively few years Nunthorpe had shed its agricultural image. The railway and improved road links plus bus services making it possible to live in Nunthorpe and work elsewhere. Between 1930 and 1939 the male population, with few exceptions commuted by rail to Middlesbrough using a half hourly service called the “Sentinel” consisting of a steam engine sandwiched between two coaches. At this time about 40 trains went through Nunthorpe each day. 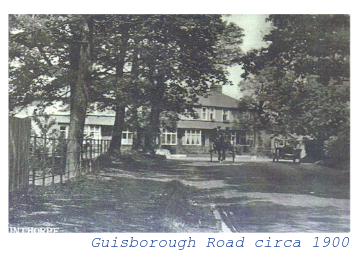 Polo was played in Nunthorpe around 1900. The Polo ponies were transported to Nunthorpe station where they were then ridden along Guisborough Road to the polo field. Polo was played by Sir Arthur Dorman’s youngest son George Lockwood Dorman who died in 1901 in the Boer War. As a memorial to him Sir Arthur built the Dorman Museum in Middlesbrough.

By the 1960’s Nunthorpe was attracting workers moving from different areas of the country to the industrial north east, some to work in ICI and British Steel.

• As Nunthorpe expanded new housing estates were built. Primary and secondary schools opened during the 1960s and 1970s.

• Political boundary changes of 1968 still divide Nunthorpe. Redcar and Cleveland and Middlesbrough Council are current authorities and the railway line continues to define the boundary.

• In 1963 a nuclear fall out shelter was built on the outskirts of Nunthorpe. It was decommissioned in 1992.

• Nunthorpe has both a Parish and a Community Council.