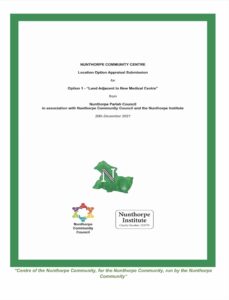 We are now in a position to share the details of the joint Parish Council, Community Council and the Nunthorpe Institute bid to host the proposed Community Centre on land adjacent to the New Medical Centre on Stokesley Road. The Independent Assessors appointed by Middlesbrough Borough Council have completed their marking of the two bids (the other put forward by Nunthorpe & Marton Playing Fields Association) against pre-agreed criteria. Sadly our marks were a little lower than NMPFA’s, but the selection process is not yet complete.  The bid comprises the primary bid documents and 21 appendices. We will keep you informed of progress via our Facebook feed.

Please click on the image of the cover of the bid to read the full document.