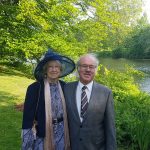 Every year The Queen hosts three parties in the Palace and one in Holyroodhouse as a way to recognise and reward public service.  The first Garden Party at Buckingham Palace for 2019 was held on May 15th with the Prince of Wales, the Duchess of Cornwall and the Princess Royal in attendance.  Our longest serving Parish Councillor David Leyland and his wife Doreen were honoured to attend in recognition of their service to our community.  Read on to read David’s proud recollection of the day.

” The morning dawned with blue skies and sunshine. Perfect weather for our appointment at The Palace. It is safe to say that Doreen and I were a little overdressed for our train journey from Surrey to London Waterloo but once there we joined a throng of similarly attired people all heading excitedly in the same direction. Our taxi took us to the Grosvenor Place Gate at Buckingham Palace to join a veritable fashion parade auditioning for the best dressed queue.

Once past a seamless security inspection we were in The Palace Gardens at last. Cold drinks and beautifully appointed loos awaited us. The latter most gratefully received.

To the strains of a military band we wandered past the ducks on the lake to the afternoon tea tent. The long queues of our imagination were met with small lines of people queuing at right angles to the main long marquee so that service of the delicious and beautifully presented food was quick and faultless.

As per our programme, at four o’clock precisely, Prince Charles, The Duchess of Cornwall and Princess Anne appeared on the terrace and the National Anthem was played by the second of the brass bands on duty.

Royalty, preceded by a guard of ‘ Beefeaters’, moved slowly down the ranks of those to be presented whilst we who were not best placed to get a close up view moved off to wander around the gardens. The terrace in front of The Palace was no longer out of bounds by this time so we climbed the steps to get a Royal eye view of the garden. Doreen and I had a ‘we woz there’ moment last week when President Trump et al were standing in the very same spot. Sad to say that they had not been offered the tub of ice cream that we had been eating at the time. The Palace Gardens were beautiful in the sunlight: not too manicured but colourful and majestic. Too much work for The Grumpy Gardeners of Nunthorpe but a special moment just to be there. All too soon it was nearly six o’clock and we were observing the bandmaster carefully eyeing his watch until it reached the hour, when he struck up the band once more to play the National Anthem as our cue that it was time to leave. And what a departure it was, through the Palace into the courtyard, soon to be seen by the departing and arriving Prime Minister. Then through the main palace arch to see tourists looking through the railings from the other side wondering who the heck we were. Now we know why state occasions run so smoothly. Attention to detail, precision and excellence were on show in everything and from everyone at our Royal Appointment. We felt extremely proud to be British.

As we had a welcome drink in a nearby hotel afterwards, an American couple spotted Doreen’s hat, by this time in her hand, and asked in awed tones if we had been to tea. When we said that we had, they asked how we got to be there and the Parish Council got its moment in the sun. The lovely lady then told us that they avidly watched The Crown on TV. A touching end to a magical day that I am so glad I was able to share with Doreen who has always worked behind the scenes so that I could ‘Save Nunthorpe’ as our children are apt to say. Thank you, it was an honour to represent Nunthorpe on your behalf. 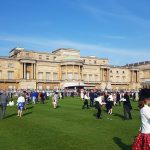 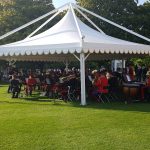 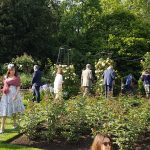 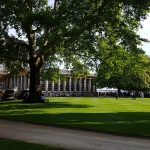